Warning: I am experimenting html language, so to set the audio podcasts up beside their texts. This language isn’t that easy. Sorry for inconveniences!

Allstar Record Co.
1953: 3116 Garrow St., Houston TX
1958-1959: 2106 Orean Street, Houston 17, Texas
1960: Allstar Music Enterprises, 8029 Gulf Freeway, Houston 17, Texas
1961-1966: 1110 Washington, South Houston, Texas
also: Allstar Distributors
Allstar Records, a quasi-song-poem label with a slightly more plausible claim to legitimacy than most its song-sharking peers, was the brainchild of Houston country musician/”singer” Daniel James Mechura. The ambitious Mechura started out as the frontman of a local outfit, the Sun Valley Playboys, enjoying one release on the Starday label (which they paid for themselves) in 1955. By that time, Dan had discovered the seedy underworld of songwriter’s clubs and, sensing an opportunity ripe for exploitation, soon began doing business as president of “The Folk Writers Co-Operative Association,” generously offering “every songwriter the help which is necessary to succeed in this competitive field,” as stated in one sales pitch. A record label of their own was the logical outgrowth of this “co-op.”

The earliest known record on Allstar dates from 1953; there appears to have been no further releases until a handful came out over 1956-57. Mechura seems to have finally got his act together in 1958, when no fewer than ten releases appeared under the Allstar banner. For a low-budget, no-hit, one-man operation, Allstar was relatively prolific from that point on, racking up an impressive discography of over 150 singles (not counting subsidiaries), until hitting the wall in 1966.

Mechura’s modus operandi was very similar to Sandy Stanton’s at Fable Records, but differed from it in significant ways. Like Fable, Allstar issued “legitimate” commercially-oriented records right alongside their song-poem efforts; sometimes a particular record’s A and B sides were divided between song-poems and non-song-poems. Throughout the label’s life, Mechura was able to recruit established, professional country singers well-known in Texas — not faceless studio hacks, but guys with proven track records and recording careers.
Eddie Noack, best remembered today for his bizarre late ’60s sides for K-Ark (“Psycho,” “Delores,” etc.) had several memorable outings on Allstar, working in a Buck Owens mode. Noack had previously recorded for 4-Star, Starday, and Mercury, and had written Hank Snow’s 1956 Top 20 hit “These Hands.” Link Davis, a cagey veteran who’d recorded everything from pre-war western swing to drunken rock and roll, also dipped into Allstar’s waters for several years. Davis had cut innumerable sides for Columbia, Okeh, Imperial, and many more; his 1952 record of “Big Mamou” (Okeh) was a decent-sized hit, covered by several pop acts including Ella Mae Morse. Link’s rockin’ “Bon-Ta-Ru-La” is one of the very best Allstar records.

Other artists like Jerry Jericho weren’t nationally known, but were big in Texas.

Thus, knowing (or hoping) that their song-poems were set to be recorded by established “stars” such as these must have been extremely alluring to the amateur songwriter. (As far as we can tell, Noack — a genuinely talented songwriter — never stooped to song-poem levels, but Davis and many others on the label certainly did.) Mechura usually recruited some better-than-average musicians for his sessions as well, and the typical Allstar release more or less sounds like anything you would’ve heard on country music radio stations in the late ’50s through the mid-’60s. (This excludes the records Mechura himself sang under his show-biz pseudonym Daniel James; “flat” doesn’t

quite describe these audio abortions.

On the other hand, some non-Texas artists also show up on Allstar, including Hank Mizzell of “Jungle Rock” fame, Johnny Watson, Tommy Trent, and, of course, the ubiquitous Sammy Marshall.
Johnny Watson “Come to the party“ (Allstar 7167)

download
Tommy Trent “A mile to the mailbox” (Allstar 7198)

Distribution was another matter. Bill Freeman, a local musician who was involved with Allstar in its early days, quite candidly recalled in an interview that Mechura would milk the amateur songwriter for all they were worth, cut the record, press the bare minimum amount of copies, send these copies to Billboard, Cashbox, and to all the radio stations in the vicinity of the songwriter’s home — and nothing more. The trade write-ups and local airplay would create the illusion that Allstar was promoting their song-poems like crazy, but Freeman claims this was all just a con of Mechura’s to keep his song-poets baited. Undoubtedly this was true of a few releases — and perhaps even more than that — but owing to the commercial appeal that many Allstar 45s possess, and the fact that his song-poem singles are greatly outnumbered by his “legit” ones, it seems highly unlikely that Mechura didn’t try to press, distribute, and promote most of his releases through the usual channels. The impression one gets listening to the label over its lifetime is that he was far more preoccupied by scoring a hit record — although that never happened — than he was with song-sharking for fun and profit.

Other interesting artists of the Allstar stable were:

Part of the George & Earl duet on Mercury (1956), Earl Aycock (see his story later on the site) had interesting anonymously issued (mostly rockabilly) songs on Dixie. In 1957, he cut the fine “


Another is RED MANSEL. He appeared first on Starday custom serie, and seems to have been a familiar of Dan Mechura (he co-wrote the latter’s Starday # 518 effort). Mechura had him cut 8 sides, all which I know are nice Hillbilly bops  or rockabillies, the best being “Johnny on the spot” (7160) and “My only one” (7174). “Changing heart” (7615) was a return to Red’s hillbilly roots (a fine uptempo hillbilly ballad). # 7162 escaped until now to my researches.

Red Mansel worked the country circuit in and around the Panhandle town of Amarillo, Texas in the 1950s where local dates fronting his own Hillbilly Boys were promoted twice-weekly on a 15 minute spot on local tv station KFDA. Red also played guitar for local honky tonker Virgil Humes. 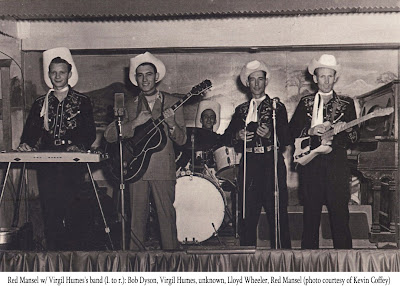 1955 saw Red Mansel release his first record using Starday’s custom series . The disc paired two originals including the mid-tempo honky tonk shuffler “I’ve Crossed You Off My List” on the A-side (# 523) . As was the case with pretty much every other pressing in the series there was no hit for Red and his Hillbilly Boys. 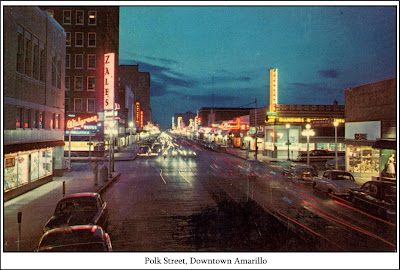 In April of 1956 Billboard Magazine announced that Red Mansel had inked a two-year deal with Dan Mechura’s Houston based Allstar label .  Despite steady Billboard mentions through the spring and early summer of 1956 Red’s first for Mechura’s imprint was panned by the trade rag as was another later release.

Songwriter’s World, a vanity journal modeled after Songwriter’s Review and others of that sort, was issued by Mechura for an indeterminable period in the late ’50s, or possibly even beyond. “Dedicated to the Songwriter Throughout the World,” this glossy 12-page mag featured photos of singers and song-poets alike, gossip, Q&A, a songwriter’s glossary (“Songshark: one who renders unethical services for large fees”), lots of ads plugging Allstar’s latest releases, and hypocritcal anti-shark editorials from Mechura himself.
Worth mentioning are Allstar’s subsidiaries, Kool, Teen, and Nu-Star. None of them, however, were song-poem labels.
While various rumors have circulated that Allstar’s demise occured under rather dubious circumstances, we’ll wait until we can gather more facts until passing further judgment. Dan Mechura himself was last heard from enjoying the quiet life in Arkansas, unwilling to divulge any information about his excursion into the record business, let alone the song-poem record business.

Notes by famous Texan musicologist Andrew Brown from www.songpoemmusic.com site, devoted to song-poem labels. See Andrew’s “www.wired-for-sound.com” site.
Many label scans or mp3 taken from the net. Several were given by Allan Turner or John Brown, tanks to them. Most music was taken from the net (Van Buchanan‘s Youtube chain – he is Dan Mechuras’s nephew…alas he didn’t answer for help).